Steve runs Dolphin Survey Boat Trips, the original ecotourism operation in New Quay and Cardigan Bay, taking paying passengers out to see the local marine wildlife. He has over 30 years of experience running and operating boats in Cardigan Bay, and is second coxswain on New Quays All weather lifeboat, being a member of the crew for over 25 years.

Find out more about Dolphin Survey Boat Trips from Steve below. 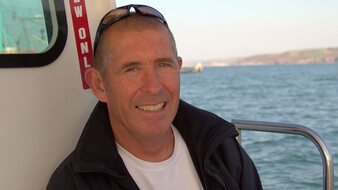 So Steve, how long have you been involved with the cetaceans of Cardigan Bay and what got you interested?

I first developed an interest in cetaceans when I was a commercial fisherman based here more than 30 years ago , I was fascinated by all the marine life I was seeing off the Welsh coast whilst out at sea. I then became more involved in scientific research efforts, taking various scientists out on surveys covering Cardigan Bay and the Irish Sea in the 1980s. In the early 1990s I started an angling operation and soon discovered that I was far more interested in watching the wildlife, the whales and dolphins than I was in taking people out to catch fish just so they could photograph themselves with their catch! After that a friend suggested that I start running wildlife-watching trips for the paying public and this is how Dolphin Survey Boat Trips (DSBT) began and how the public going out on our boat trips help to fund important marine research. Around this time I also set up the Cardigan Bay Marine Wildlife Centre (CBMWC).


What research have you been involved in?

Over the years I’ve been involved as boatman for a number of surveys in Cardigan Bay and the Irish Sea. In the 1980’s I took scientists out to carry out hydrophone and dolphin photo-ID surveys. Currently, the main focus of our research is the photo-ID of bottlenose dolphins in Cardigan Bay. In 2005 we produced the first Cardigan Bay Marine Wildlife Centre (CBMWC) Bottlenose Dolphin Photo-Identification Catalogue. In this we identified over 130 individual dolphins. This is an ongoing project and the catalogue is updated annually.

What wildlife, other than the bottlenose dolphins, do you see in the area?

Cardigan Bay is fantastic for marine wildlife. As well as bottlenose dolphins we also find harbour porpoises locally and Atlantic grey seals (which also breed in the area), we also have occasional sightings of common dolphins and Minke whales. The birdlife is excellent with Manx shearwaters, guillemots, razorbills, kittiwakes, gulls, cormorants, shags, gannets, peregrines and choughs to name a few species. The Irish Sea is also a great area for Risso’s dolphins, basking sharks, sunfish, jellyfish and the occasional leatherback turtle!

What have you learned about the habits and distribution of bottlenose dolphins in the Bay?


What are the main threats to cetaceans and other wildlife in the area?

The main threat to cetaceans (whales, dolphins and porpoises) anywhere is a shortage of food due to overfishing. In Cardigan Bay, this is not so much of a problem as the local fishing industry is generally small scale and has relatively little impact. I am concerned, however, about the catch of migratory fish outside the Bay, which would normally come into the area. Inappropriate boating behaviour around the dolphins is also a problem. The commercial dolphin watching operators in the area act according to a voluntary marine code of conduct, but private vessels can still cause problems, especially by disturbing animals in important and sensitive feeding areas. As with everywhere else, industrial pollution may also be a problem with toxic materials bio-accumulating up the food chain ultimately affecting top predators like the dolphins.

What are your hopes for the Bay and the dolphins for the future?

I really hope that efforts to protect Cardigan Bay and the marine wildlife we find will continue so that everyone can enjoy it. The conservation of the Bay should be carried out in conjunction with local people and local organisations like ​The Wildlife Trust of South and West Wales (WTSWW) and not to outside organisations dictating from a distance. Community ownership is the key to common-sense conservation. I would also like to see wider education of potential disturbance of wildlife with boat users in the area, awareness on how to act sensitively around the dolphins and other wildlife in order to prevent disturbance of the wonderful creatures found here.
Theme by ROOMY THEMES
Site powered by MWT Cymru
Theme by ROOMY THEMES
Close
Call: 01545 560 032
BOOK NOW